Public transportation, roads, and buildings are frequently inaccessible in Iran, leading to increased accidents and isolation for people with disabilities.

News of severe injuries sustained by a blind man who fell from a pedestrian bridge in the southern Iranian city of Chabahar has sparked concerns over the city’s lack of accessible safety signs as well as renewed calls for urgent action by the government.

While walking on his usual daily route on August 6, 2019, Soali Nokari fell from a bridge and was hospitalized in the intensive care unit with severe hip and rib injuries.

If warning tape had been placed at the site of the accident to warn people with disabilities about ongoing construction on the bridge, Nokari would have been able to avoid the fall.

According to the braille Iran Sepid newspaper, Mr. Nokari was well acquainted with his route and had crossed the pedestrian bridge daily.

However, due to the recent repairs the bridge was undergoing and the lack of accessible warning signs for the blind, he did not know that the bridge’s fencing had been removed and fell onto the street below.

“The contractor was neglectful in this project and did not install warning signs for blind citizens,” said Chabahar Mayor Mohammad Haqqani in an interview with Iran Sepid.

Haqqani promised that “all medical expenses would be covered from the contractor,” but failed to announce the implementation of measures that would prevent future accidents like this from happening.

People with disabilities sustain injuries on a regular basis in Iran due to the lack of preventive measures taken by the government and local municipalities to ensure safe and accessible infrastructure and public spaces.

Many accidents go unreported, but in 2016 a blind man named Abbas Nobaghi almost died after falling from a pedestrian bridge that was under construction without any accessible warning signs in the city of Varamin.

According to local news reports, the municipality had demolished the pedestrian bridge Nobaghi ​​crossed every day and installed barricade tape nearby but failed to ensure that it was detectable by blind people.

Unaware of the construction, Nobaghi ​​climbed the stairs of the collapsing bridge as part of his daily routine and fell onto the street. With fractured ribs and heavy bleeding in his head, he was transferred to Tehran for urgent care.

“One wonders why the municipality did not consider any safety measures… Due to this negligence, some people in the community become second-class or lower citizens,” the deputy head of the Tehran Welfare Organization’s Rehabilitation Department Mohammad Reza Asadi told the state-funded Iranian Students News Agency (ISNA).

The lack of accessibility in Iran’s infrastructure and public transport systems has not only led to lack of mobility and increased isolation for people with disabilities, but also severe physical injuries and death. As a result, people with disabilities who are simply seeking to exercise their right to independent living face serious risks on a daily basis.

According to the United Nations, people with disabilities have the right to live independently and participate fully in all aspects of life.

Article 9 of the UN Convention on the Rights of Persons with Disabilities calls on states parties including Iran to “take appropriate measures to ensure to persons with disabilities access, on an equal basis with others, to the physical environment, to transportation… and to other facilities and services open or provided to the public, both in urban and in rural areas.” 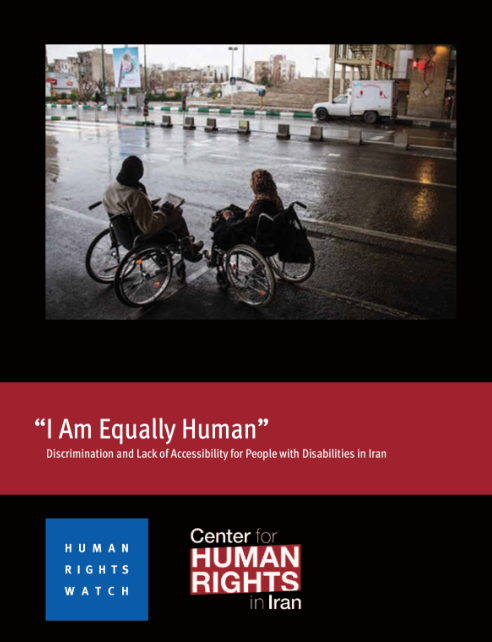 Article 2 of the Iranian Law to Protect the Rights of the Disabled meanwhile states that “[all] ministries, public and revolutionary state organizations, institutions and companies are required to ensure accessibility for people with disabilities on an equal basis with others, in their design, production and construction of facilities, public spaces, routes and equipment.”

Although the Iranian government has taken some steps towards making infrastructure and transportation accessible—especially in Tehran and other major cities—significant shortcomings remain.

For example, many buses—particularly outside the capital—still lack ramps or lifts for wheelchairs, while many subway stations still don’t have braille signage or yellow detectable warning strips that ensure accessibility and the safety of people with visual disabilities.

In a joint report by the Center for Human Rights in Iran (CHRI) and Human Rights Watch, several interviewees stated that they regularly encountered serious difficulties when trying to access the subway in their cities.

Many people with physical disabilities in wheelchairs have no option but to use the subway to get around due it its low cost compared to private transportation. But most subways lack elevators, leaving wheelchair-inaccessible escalators as the only option.

“I tried to avoid using escalators, but sometimes I had no other choice,” said “Hassan” in an interview with CHRI. “With my heavy electronic wheelchair and my heavy body, getting on the escalator was indeed a suicide [mission]. Once, I almost fell down. Had I not been lucky, I could have sustained a deadly injury.”

Maliheh Naziri Sarkhanlou, a psychologist who lives with a physical disability, described her daily problems on Twitter: “Now that I want to go shopping, I have to review all the routes in my head to choose a path that is accessible. Sometimes I choose a path and halfway in, I see there is a metal rod or a ditch on the sidewalk. [So] I always have to go on the street, [with cars] beeping ‘go away, get on the sidewalk.’ I’m scared of going out.”

Blind lawyer Elham Youssefian responded to Naziri Sarkhanlu: “Many of us blind people would prefer to walk on the street rather than on the sidewalk. The street only poses the danger of car accidents, but the sidewalks are full of obstacles and holes, especially gas canisters and the handlebars of motorbikes that can’t be identified by white canes. You only become aware of their presence when they hit your arm or face.”

In recent years, the Iranian government has taken some major steps to improve its understanding of the inaccessibility of public spaces including by designing an online application called “Masiryab,” which, according to head of National Headquarters of Accessibility Ebrahim Kazemi Momensarayi, offers a guide to accessible places and routes.

In addition, the National Headquarters of Accessibility has introduced the text-messaging “Ma’bar” system through which people can report inaccessibility issues in city passages and public buildings.

But the ongoing, preventable accidents suffered by people with disabilities due to lacking safety and accessibility standards reveals that these measures are insufficient.

To prevent further accidents, the Iranian government and local municipalities should prioritize the safety of citizens with disabilities as soon as possible and implement measures that would require existing and new construction sites to follow rules that would ensure accessibility for all Iranians.