Religious Freedom Advocate: “Iran’s Ruling Clerics are Followers of Machiavelli, Not the Mahdi” Amir Soltani is the co-author of Zahra’s Paradise, a NYT bestselling graphic novel on Iran’s 2009 protests.

In February 2016, a senior member of Iran’s ruling Shia Muslim clergy, Ayatollah Ahmad Jannati, welcomed the head of the Nation of Islam, American Minister Louis Farrakhan, as a guest of the Islamic Republic in what was later billed as one of the most open displays of religious hypocrisy by the Islamic Republic.

“Such blight complicity and duplicity should put to rest the Saudi-propagated myth that Iran is a Shi’a power,” author and religious freedom advocate Amir Soltani told the Center for Human Rights in Iran (CHRI) in an interview on September 30, 2017.

“Iran’s ruling clerics are followers of Machiavelli, not the Mahdi,” he added.

Jannati’s embrace of Farrakhan was remarkable given that religious minorities in Iran face persecution and prison time for following alternative belief systems.

Iranian Baha’i faith leader Mahvash Sabet was released from prison on September 28, 2017, after serving 10 years for her religious beliefs. However, while she was in Evin Prison, the leader of a religion with a fundamentally different interpretation of Islam was welcomed with open arms by a prominent Iranian Shia Muslim cleric. 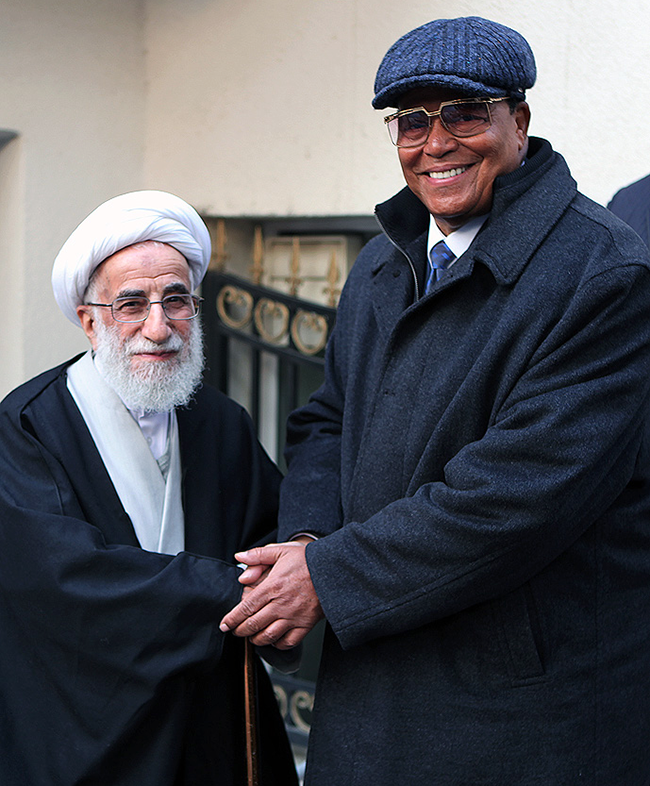 As the chairman of Iran’s influential Guardian Council, the body of six clerics and six jurists that vets laws and elections for conformity with Islamic principles, Jannati has likened non-Muslims to “animals who roam the earth and engage in corruption” and led attempts to bar non-Muslims from serving in governmental positions.

“Iran persecutes religious minorities like the Baha’is on the grounds that their beliefs violate Shia doctrine, making them subject to severe persecution in Iran,” Soltani told CHRI.

“But at the same time, they’re celebrating the 37th anniversary of their Islamic Revolution with the Nation of Islam, which also hold views contrary to Iran’s Islamic Shia beliefs,” he said.

“The Nation of Islam told its followers that Minister Farrakhan had gone to Iran to teach Iranians about the ‘real’ Mahdi and to promote peace, tolerance and unity between Islamic nations and sects,” he added.

Although Article 23 of Iran’s Constitution states that “no one may be molested or taken to task simply for holding a certain belief,” several religious minorities in Iran, including Bahai’is, Christian converts and Sufi Gonabadi Dervishes are denied many basic rights for their beliefs as part of an ongoing persecution campaign.

Soltani has launched his own campaign, with the hashtag “JannatiGoodbye,” to raise awareness about the persecution of religious minorities in Iran.

“My goal is for someone in Iran to ask Ayatollah Jannati why the Islamic Republic celebrated its founding with the Nation of Islam’s American leaders and has not extended the same courtesy to non-Shia Iranians,” he said.

“Either they have to begin persecuting themselves as heretics or grant everyone the same religious freedom they exercise,” said Soltani.