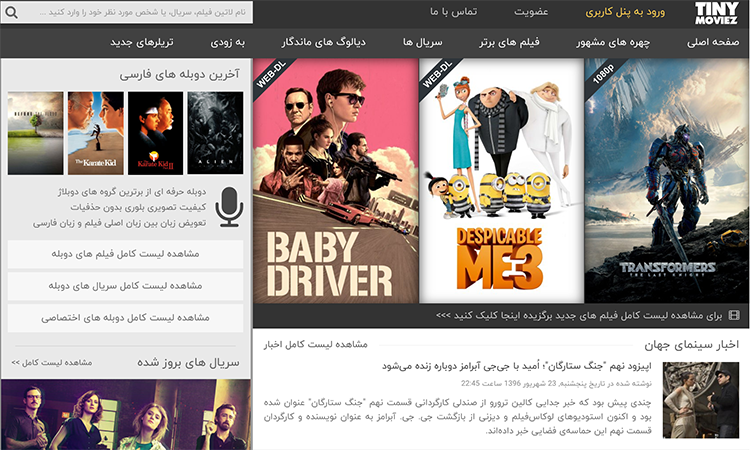 Six administrators of a popular website streaming pirated foreign films with Farsi-language subtitles and voiceovers have been arrested following complaints from their rivals, which were licensed to distribute the pirated movies by the government.

The chief admin of the TinyMovies website is among the detainees, a source with knowledge about the case told the Center for Human Rights in Iran (CHRI) on condition of anonymity.

“This gang illegally operated the largest source for downloading Hollywood films and television series dubbed into Persian,” said Dowlatabadi. “In the past three years, they have generated illegal revenues by offering 18,000 dubbed foreign films and series, many of them with indecent and immoral content.”

Digiato, an Iranian website dedicated to tech news, reported on September 27 that the judicial action was likely initiated by Iranian companies and organizations that see TinyMoviez as a competitor.

“In July and August [2017], there was a meeting between a number of Iranian start-up companies and [current Telecommunications Minister Mohammad Javad Azari] Jahromi, who was asked by film and TV series distributors as well as video game developers to help shut down and monitor unlicensed rivals,” a film distributor in Tehran told CHRI on condition of anonymity on September 27.

“The start-ups made the request because they could not compete with a site like TinyMoviez,” added the source. “After that meeting, Jahromi was nicknamed the ‘Start-Up Tsar’ because of his supportive comments. They were happy that he became the minister.”

However, on September 29 Jahromi denied any involvement in shutting down TinyMoviez.

“The Telecommunications Ministry and the Taskforce to Determine Instances of Criminal Content have not taken any action to block this site and the ministry played no role in its closure,” he told told IRIB News.

“The individuals connected with this site were arrested by the judiciary and afterwards their servers went down,” he added. “That’s why it cannot be accessed. It’s inactive.”

His direct involvement in surveillance operations during the state crackdown on the peaceful protests in 2009 and allegations that he personally interrogated activists have raised concerns about his new job among internet freedom and civil rights activists.

CHRI’s investigations indicate that TinyMoviez was shut down in accordance with Iran’s Law for the Protection of the Rights of Authors, Writers, and Artists, which prohibits the broadcast of pirated foreign films without a license from government agencies, such as the Ministry of Culture and Islamic Guidance.

In effect, Iran’s licensing requirements amount to a state monopoly over the products independent of and with no consideration for the original copyright holders.

For example, the ministry could license Aparat, Iran’s version of YouTube, to be the sole distributor of the pirated version of the Game of Thrones TV series. Other Iranian websites would accordingly be required to obtain permission from Aparat to broadcast the series, without any regard for or consultation with the original copyright holders.

According to Digiato, 300-400 new subscribers join TinyMoviez every month. The monthly subscription rate is set at 4,000 tomans, or about $10 USD and the website has pirated many foreign films while adding Farsi language subtitles or voiceovers.

“When we wanted to distribute the FIFA , we had to pay a 600 million toman licensing fee ($181,000 USD) and deposit it into the personal account of one of the officials, who was related to a member of Parliament,” an Iranian video game developer, who spoke on condition of anonymity, told CHRI.

In 2015, Hassan Karimi Ghodoosi, the head of the Iran Computer and Video Games Foundation, announced that licenses were required from the organization to distribute foreign video games.

*This article was modified on October 14, 2017, to reflect the proper spelling of the TinyMoviez website.