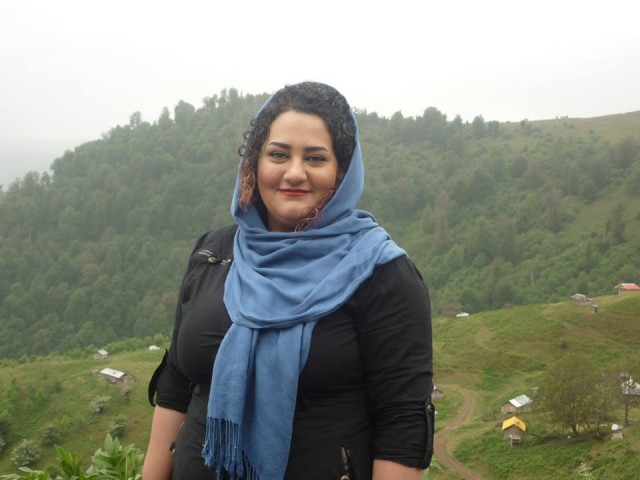 A young civil activist who has been held at Evin Prison since October 2014 has been sentenced to seven years in prison at her interrogator’s urging, a source close to the case told the International Campaign for Human Rights in Iran, for her Facebook postings and her participation in peaceful gatherings.

Atena Daemi, 27, who was held for several months under “temporary detention” despite her lawyer’s repeated requests for her release on bail, was prosecuted under four charges: “assembly and collusion against national security,” “propaganda against the state,” “insulting the Supreme Leader and the sacred,” and “concealing crime evidence” by a Tehran Revolutionary Court. Daemi did not accept any of her charges and has since appealed the court’s ruling.

“All charges are based on her posts on Facebook, information stored on her cellular phone, and her participation in gatherings against the death penalty and gatherings in support of the children of Kobane [in Syria],” the source told the Campaign. Daemi and her lawyer were informed of the sentence on May 12.

Daemi, who worked at the Revolution Sports Club in Tehran, was arrested on October 21, 2014, by the Islamic Revolutionary Guards and has been in detention in Evin Prison ever since. Her trial was held on March 7, 2015.

“She was accused of ‘insulting the Supreme Leader and the sacred’ because of some jokes and some Shahin Najafi [protest] songs found on her cell phone. Other than these, there is no other [evidence of] actions Atena may have taken about these two charges. She has repeatedly apologized and explained that she meant no insult,” said the source.

“Many people in Iran may have these songs and jokes on their cell phones, but they are not charged or sent to prison. It is clear in Atena’s case that the interrogator’s personal taste is at work,” added the source.

“Atena was convicted of ‘assembly and collusion against national security,’ and ‘propaganda against the state,’ for her opposition to forced hijab [female dress] through her Facebook posts, and her opposition to the capital punishment through participating in gatherings, as well as gatherings she attended to protest the situation of Kobane children [in Syria],” the source added.

“Her family is hopeful that her case [will be] reviewed based on justice, humanity, and the law at the appeals level, and not based on personal taste. This girl has done nothing intentionally to deserve four charges and seven years in prison,” said the source.

The source told the Campaign that Daemi is thoroughly devastated by the sentence. “Atena was very hopeful of being acquitted and released, but now she faces seven years in prison. It means she will have to spend the best years of her life at Evin. She is in such dire shape, her family have sent her tranquilizers.”

Atena Daemi and four other young individuals by the names of Omid Alishenas, Ali Nouri, Atena Feraghdani, and Aso Rostami, were separately interrogated in the same case. Atena Feraghdani’s case was later separated and reviewed independently. The Campaign does not have any information about the outcome of the other individuals’ prosecution.